Friday saw the release of the new trailer for this year’s Star Wars offering; Rogue One a Star Wars story and needless to say I am excited.

The movie is set just before the events of Episode IV (A New Hope) and is about the theft of the Deathstar’s plans and getting them to Princess Leia who of course is caught carrying them at the beginning of the first Star Wars movie when Vader aboard the ISD Devestator engaged her.

In the old Expanded Universe they were taken from the planet Raltiir whilst the Deathstar was constructed over the Penal prison at Despayrre which was destroyed during the test firing. Of course…. That was then… this is now.

With Disney’s takeover of the Star Wars universe the old lore is gone ( I may have mentioned this every time I have blogged about the new Star Wars developments and I promise I will stop moaning about it!).

So what makes Rogue One an appealing concept. Well for me it is an unknown – these characters are not the main canon characters and they are going up against the Empire’s best in a commando style mission to save the galaxy in the same sort of vein as Where Eagles Dare, Dirty Dozen or Heroes of Telemark which really appeals to the Role Player in me. Also as they are not canon characters it means that there is no guarantee as to who will survive and who will be killed off – there’s not even a guarantee that Jyn Erso, Felicity Jones’ main protagonist will make it to the role of credits. This makes the movie so much more enjoyable the first time you watch it. Let’s be honest, Family guy nailed it when they stated in “Something, something Darkside,” that “Don’t worry we have a ship of four of the main characters, I’m sure we’ll be fine.”

There have been complaints about having a female lead in some corners of Youtube which I find as confusing as those who complained about a black Stormtrooper (John Boyega’s Fin in Episode VII). It is good to see a strong female character in the lead in a Galaxy which up until recently was lacking serious female characters within the movie branch of the franchise. Jyn looks to have the edge and combat skills of Han Solo with just as much balls. Ultimately I cannot judge until that great day when I get to watch the movie in full – and review it – but let’s give her a shot. From the trailer’s I don’t think she is going to disappoint. 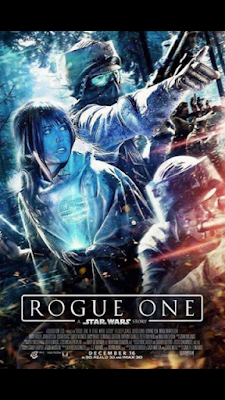 There are also people who are complaining that this is not Star Wars and there are no Jedi (except Lord Vader) but to be honest – yes it is. The Star Wars universe is vast with a multitude of different species and backgrounds all trying to live their lives and force users were always in the minority and of varying strength. The draw of Luke Skywalker, Vader, Yoda, Palpatine and Obi-Wan was that they were a minority and put them above the other warriors. The prequels almost overdid the Jedi aspect with them pretty much everywhere making them somewhat less special. Rogue One offers us someone else’s story in the same vein as the old “Tales of:” books from the EU. To quote the old Wizards of the Coast advert “What’s this guys story?” I want to see someone else’s struggle against the Empire, their motivations, their perils, loves, losses – it is a huge galaxy let’s see other aspects and explore new worlds and possibilities. Rogue One has vast potential here.

The Imperial hardware is, as always, very impressive looking with the ubiquitous Stormtroopers, a new version of stormcommando(?) and AT-ATs, armoured speeders and TIE/LN fighters with the rebels running around with cobbled together and “appropriated” gear showing the desperation they face against unrelenting Imperial materiel.

I love the piano and slowed down Imperial march building into the Star Wars theme which compliments the cinematic shots and art including the Deathstar eclipse of a sun. It looks really well shot and I’m hoping that it will play out into a two hour movie but I am excited.
Posted by Chris Sams at Sunday, August 14, 2016