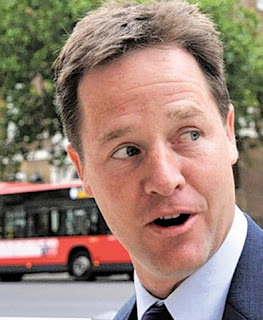 I didn't hear "Call Nick" this morning on LBC, I was on a train to work and reception is fairly bad at the best of times. I did follow along with Twitter though.

Granted most of my Twitter feed is made up of Liberal Democrats but the general feeling was that Nick did well.

When I first heard of the "Call Nick" scheme I couldn't help but think this was a horrendously bad idea. Let's be honest he is hardly one of the best loved people in the UK, the general feeling amongst the public, rightly or wrongly, is that the Party sold out and checked its' values at the door. Surely an open forum would lead to all kinds of abuse?

However, I'd forgotten about that Clegg magic.


Nick is an exceptionally charismatic guy, very down to earth and chatty. It is easy to forget he went to Westminster college and from a well off background. He doesn't have the Etonian twang that David Cameron has, an unfortunate impediment in the modern age of politics when you are immediately labelled a toff.

As I understand it Nick weathered the storm of an angry student and an ex Libdem councillor who was disgusted at what has happened to the party in his stride.

It is true that my faith in the Party at parliamentary party has been shaken in the past and even as recently as Tuesday with the benefits vote but the anger never lasts long. I think of the good things and the tough decisions etc etc and at the centre is Clegg.


Some days I find myself asking "What are you doing Nick?" other days I think he's doing an exceptionally difficult job exceptionally well. I know that a meeting over a pint would end in my complete rejuvenation (even if I couldn't place why) and it would be the same for many I believe.

Going on LBC was a similar move of crazy mixed with genius.
How many political leaders have gone on regular radio interviews? None.
How many times do activists complain that leadership don't know what we're up against? All the time.

What better way is there for a politician to open their ears to what the public want, fear, get angry about?

This was actually a good way to raise the party's profile and achievements in the public eye. It also provides campaign committees with an idea of public opinion and a little bit of Clegg magic helps to!